Update 2019-08-12: 29 out of 30 D1 and D2 champs from the past 15 years would fall into the D3 bucket if the teams were divided into three divisions by enrollment (draft of the three divisions is here: link).

Every year as the Michigan high school lacrosse playoffs roll around, much discussion of the format ensues. I've collected some of the Twitter discussion here: May 2019 - October 2018 - May 2018 - May 2017. Brother Rice's 41-0 win over Anchor Bay in the first round of the playoffs in 2017 catalyzed much debate. Such a lopsided score is certainly not a good look for MHSAA lacrosse, but there was evidence that both teams made an effort to make the best of a bad situation (link, link). Similarly, in 2019 there was concern about 1st-year program Cass Tech facing Brother Rice, and again both teams took the opportunity to engage in some fellowship (link). ALM's Blow Out Counter was launched in 2017 and tallies a multitude of lopsided results. The MHSAA added a playoff mercy rule (game automatically ends when an 18 goal differential occurs any time after the end of the 3rd quarter) to limit some of the extreme blowouts.

In fall/winter 2018/2019, there was discussion among the MHSAA lacrosse committee about changes to the tourney format. From the January meeting minutes:

The committee voted in October to recommend expanding the MHSAA tournament to three divisions for the 2020 season, based not on the enrollment of schools but on the Michigan Power Rating (MPR), as well as explore a two-division tournament based on the MPR. Following the October meeting, members of the Michigan High School Lacrosse Coaches Association discussed the proposal in two conference calls and several individual conversations and found little support for this change. The MHSLCA advanced other suggestions for rule changes to travel and out-of-season coaching limits. The committee unanimously voted to withdraw the recommendation to divide by three divisions based on MPR. The committee discussed, but no action was taken, again offering an MHSAA Tier II tournament where teams could opt out of the MHSAA statewide tournament. No teams were interested during the three years this was offered previously. Citing the current number of teams (130) and anticipated future growth, the committee recommended adding a third Boys Lacrosse Tournament division beginning with the 2021 season. There would be approximately 45 teams in each division and 4-8 teams in each of 8 regions per division. This format also could allow for a later start to the tournament and take up less of the regular season calendar.

I'm surprised that there was "little support" for a two-division tournament based on MPR rather than enrollment. It would certainly cut down on the early-round blowouts and give us a chance to see teams like Forest Hills Central compete with Brother Rice and Catholic Central for the state title. Maybe using MPR was the poison pill. You can certainly find some glaring examples of head scratchers in the MPR for certain teams, but actually, as I'll show later, MPR isn't all that bad overall in reality.

Fast forward to June 2019, and the MHSAA and MHSLCA are considering adding a third division (divided based on enrollment).

I'm curious to know how other states handle it, but I haven't done any research in that direction yet. I do know that in Indiana lacrosse is not sanctioned by the IHSAA, so there seems to be a bit more freedom...only the top 16 teams qualify for their tourney.

Back in May, a Tampa, FL, high school program (Alonso High School) responded on Twitter to the possibility of breaking up Florida's high school lacrosse teams into two divisions based on enrollment. They looked at the data and concluded:

Given that the MHSAA is considering adding a third division while still dividing based on enrollment, I decided to do a similar analysis for Michigan. I assumed the conclusion would be the same as Florida, and [spoiler alert] it is. I used LaxNumbers ranking or rating or Michigan Power Rating (MPR) or MPR-based ranking as the metrics of lacrosse success for the 2019 season and plotted them versus school enrollment. Have a look at the graphs below. Clearly, lacrosse success is not strongly correlated with high school enrollment in Michigan. 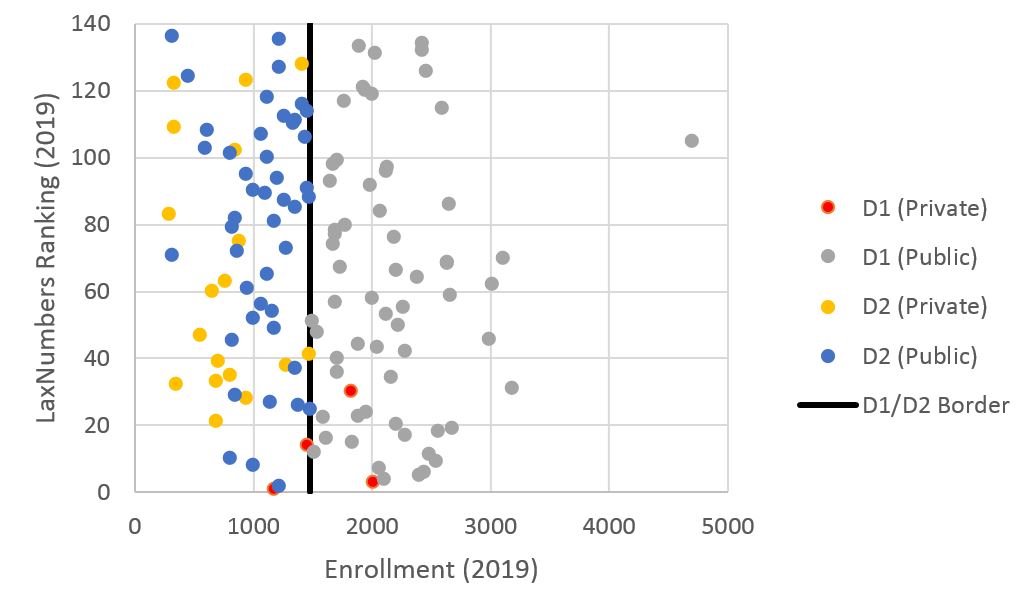 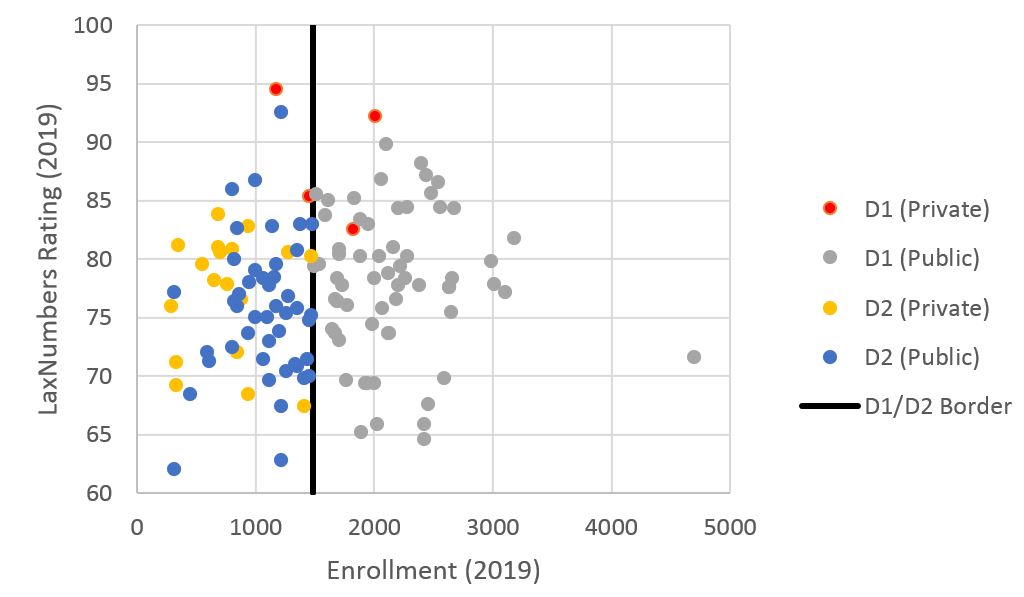 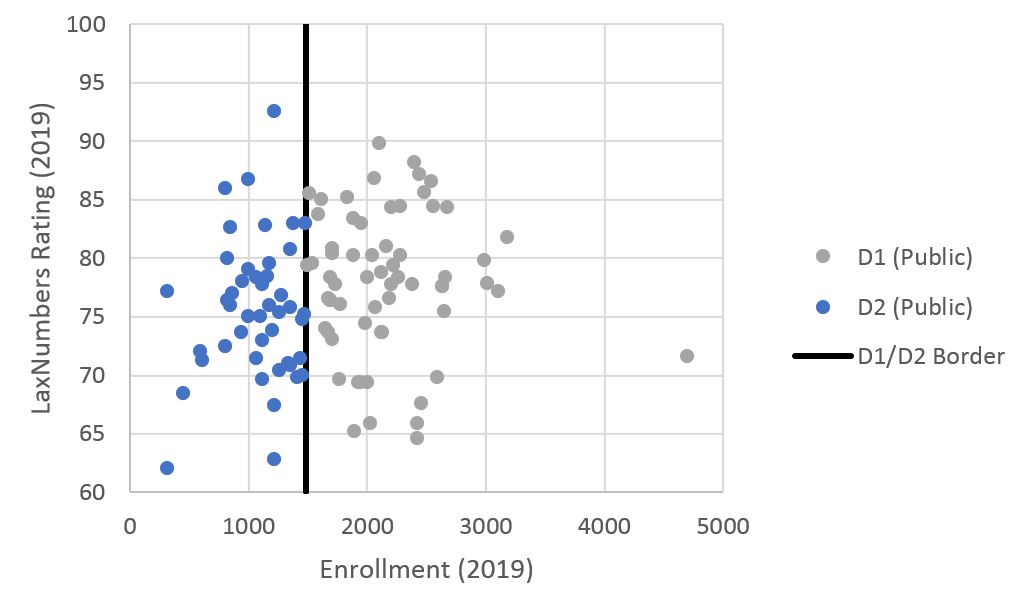 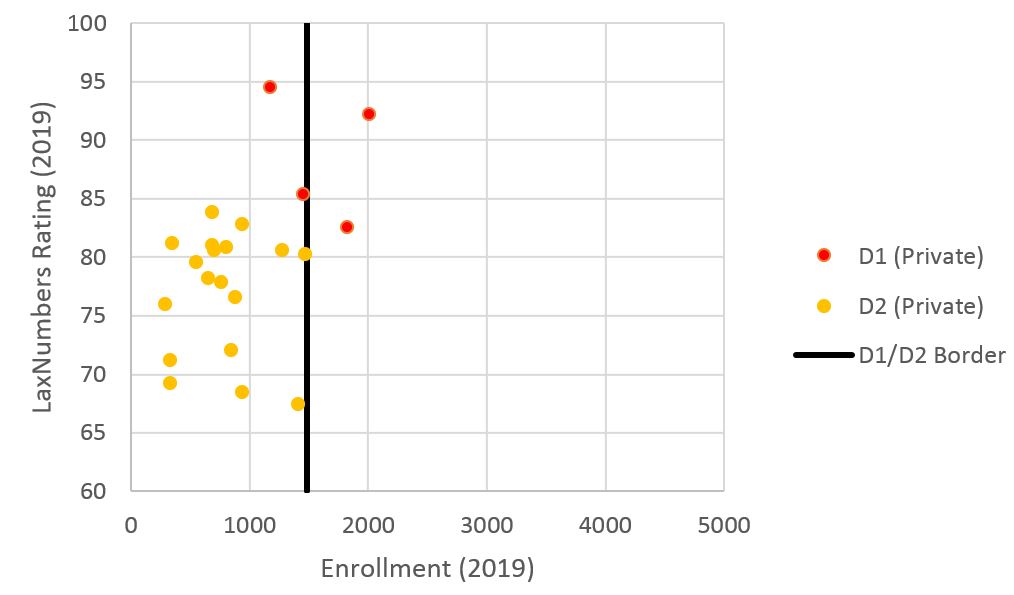 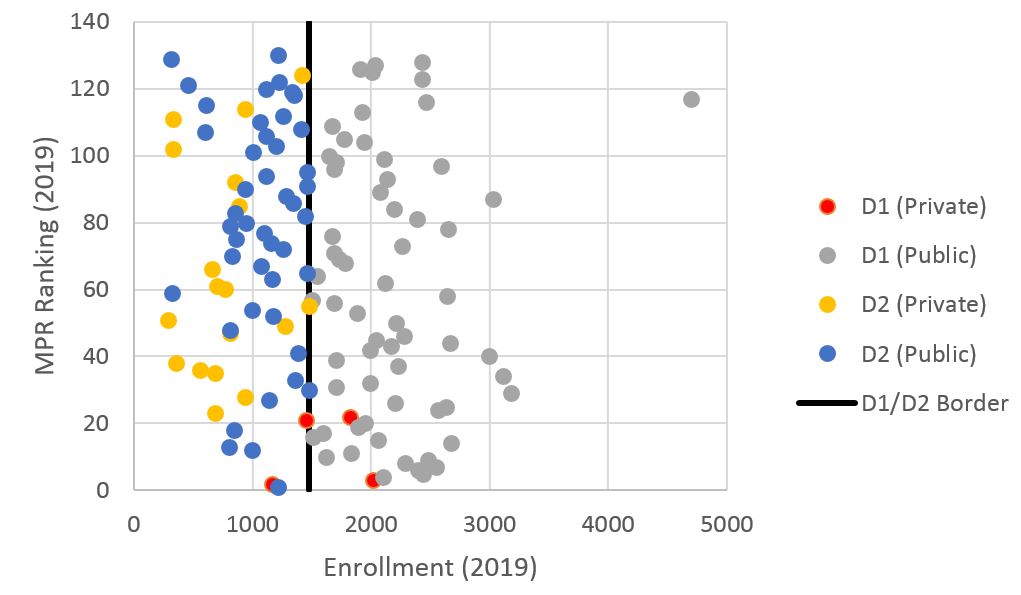 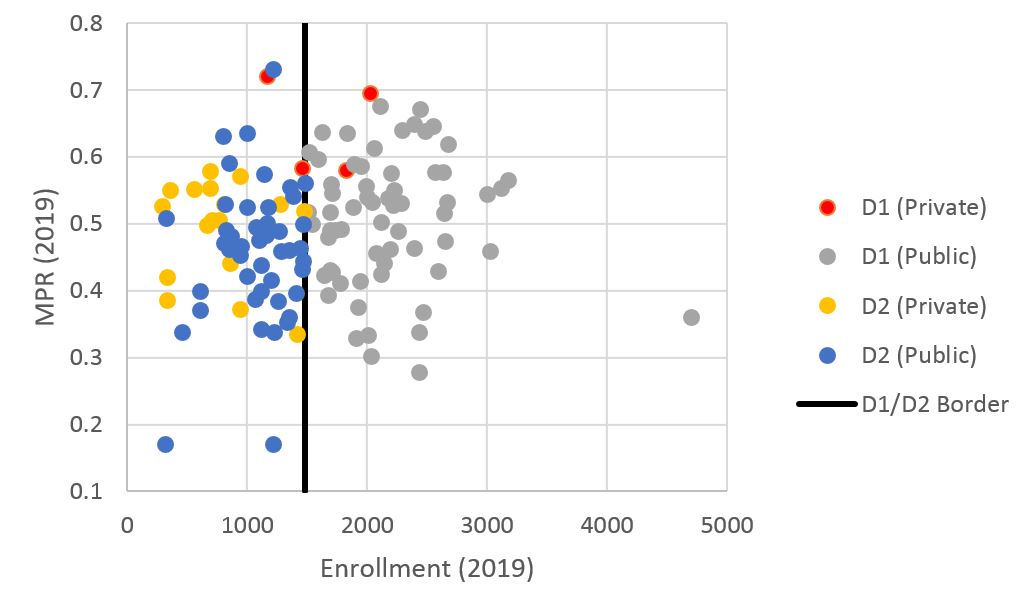 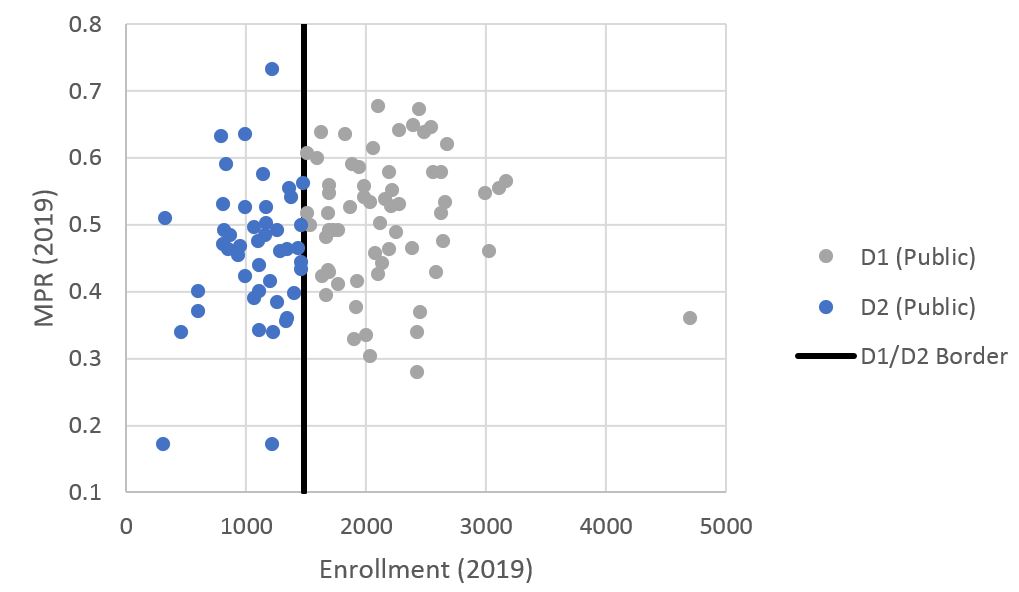 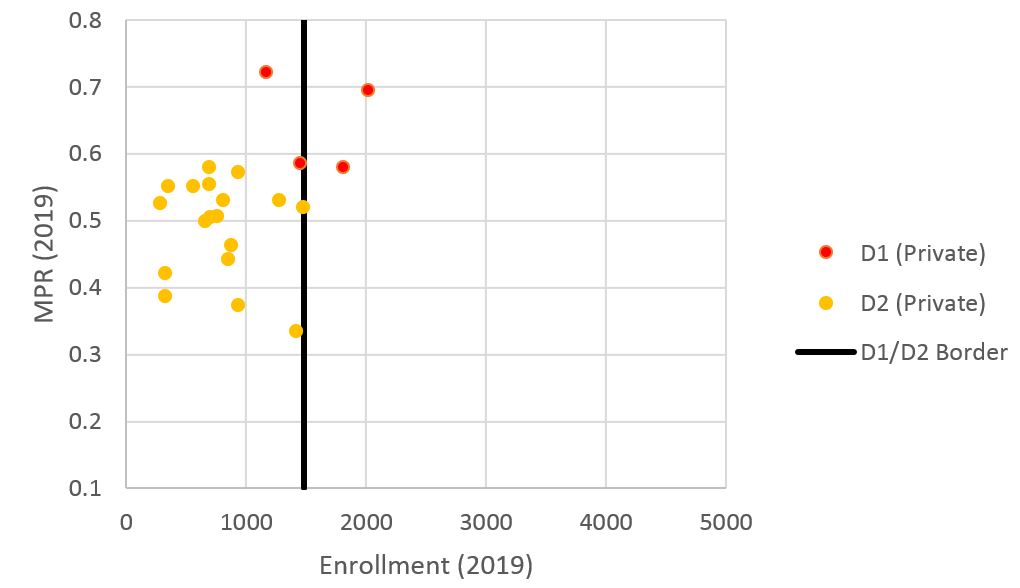 So, what's the point of using school enrollment as the metric for separating teams into divisions if enrollment is demonstrably NOT a good predictor of lacrosse success (even when considering the MHSAA's own metric of success - MPR)? Seems dumb, doesn't it? I wonder what the rational might be for ignoring the data...other than the obvious one of it being simpler to treat it like other sports even if the data says otherwise.

I, for one, don't see the point. I'd like to see MHSAA reconsider the possbility of dividing based on MPR (or other metric of success). If not, then I'd prefer to get rid of the divisions and lump everyone together. At least then we'd actually have all of the best teams competing against each other for a true state title. If we're going to stick with enrollment-based divisions, then it'd be cool to see all of the tier-one teams in division 2 (and division 3 if it is added) hold hands and opt-up to division 1 together so that we get all of the best teams competing against each other.

As I alluded to earlier, I also took a look at comparing rankings based on MPR vs LaxNumbers and comparing MPR to LaxNumbers rating. As the next two graphs show, there's a surprisingly good correlation. There are some big outliers and presumably LaxNumbers is better because it is more sophisticated, but overall MPR isn't too bad. There's a correlation coefficient of ~ 0.95 between the two. 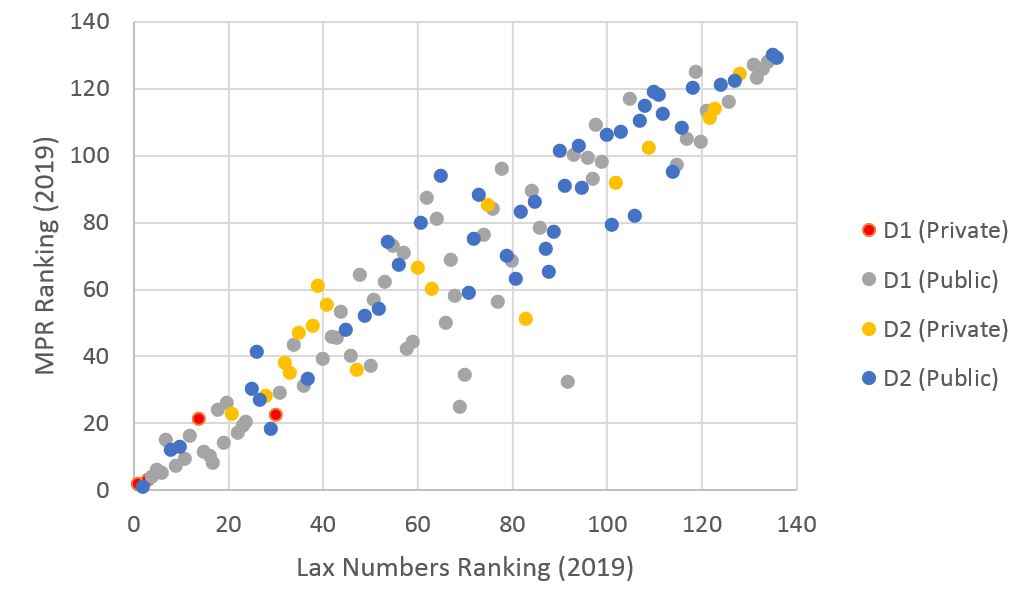 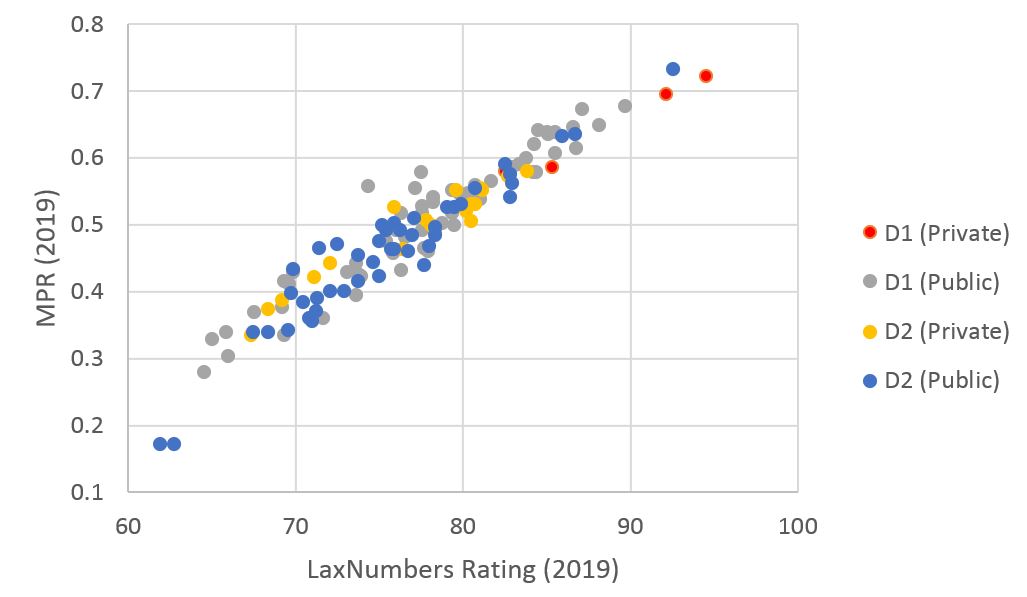 Finally, I also took a look at the co-op programs. As you may have heard, the MHSAA is looking to decrease the number of co-op teams. When deciding whether or not to approve a co-op for additional seasons, they consider criteria like the number of players in the program, how many players are cut from the teams (if there are cuts), the growth in the number of players from the previous year, and the win-loss record, for example. South Lyon and Midland will be forced to split soon...in the next year or two. Haslett and Lansing Catholic each only have a few players from their co-op partners, so they wouldn't be feasible to split because their partners wouldn't have sufficient numbers to field teams. I haven't heard anything about Birmingham, Zeeland, or Huron Valley being pressured to split...but on the surface they seem like good candidates based on their success. 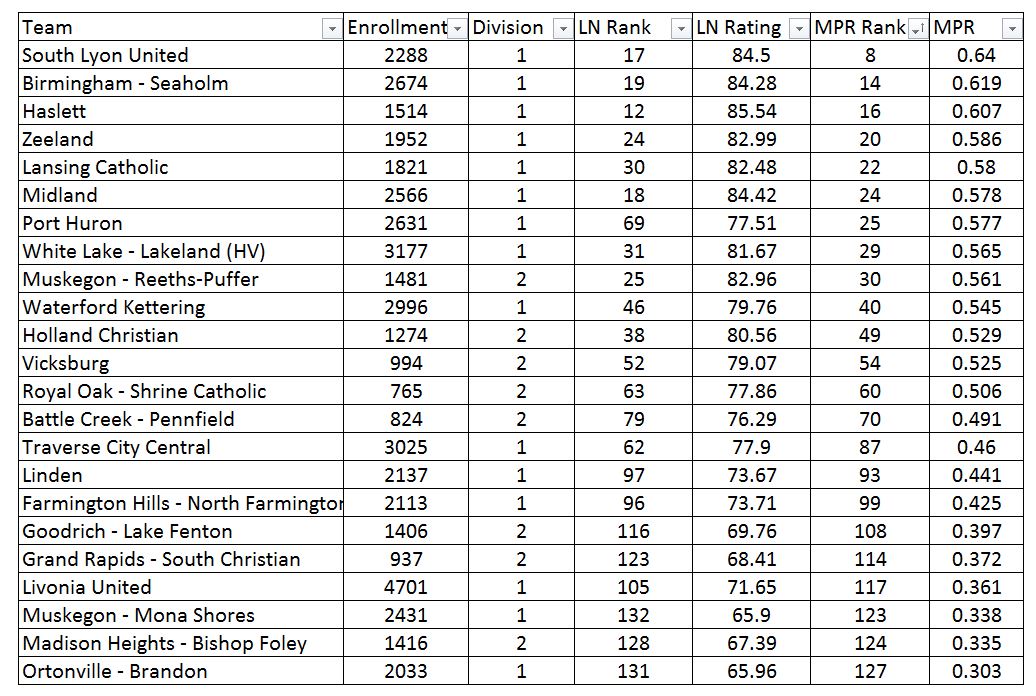